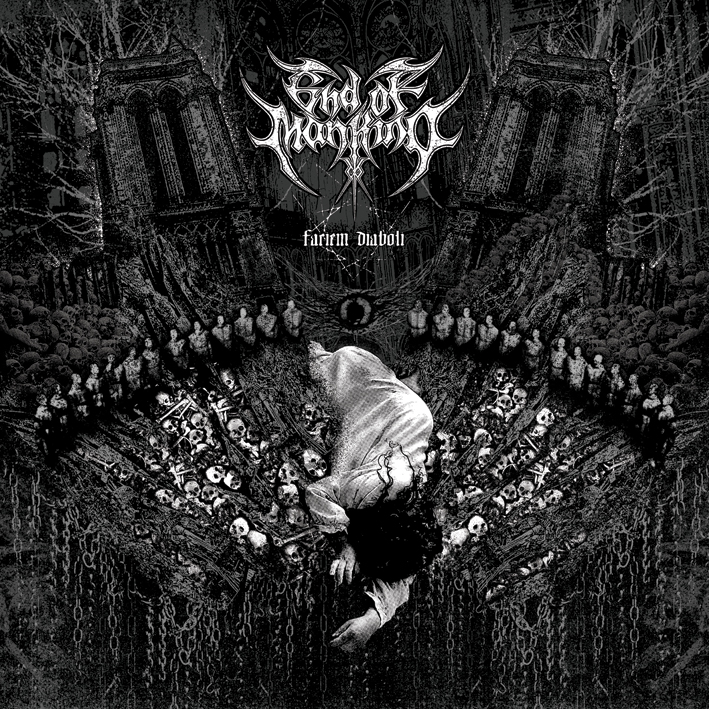 Those who have been through the glorious era of French Black Metal have certainly heard of Eternal Majesty and its masterpiece, “From War to Darkness”. Some of its members have also played in other bands such as Antaeus or Aosoth. The band split after its last album released in 2006. After over ten years of silence, it is back as END OF MANKIND with a renewed line-up which includes experienced musicians stemming from the Punk/Hardcore and extreme metal scene (Providence, Pyrecult, Nydvind, Mad At The World, Azziard…). Thanks to these diverse profiles and influences, the band manages to create a powerful Black Metal with punk/crust hints, subtly topped with post elements. While playing numerous aggressive and visual shows, after a first EP «Faith Recoil» and a split EP “Darkness Devours The Sun”, END OF MANKIND is currently working on its first full-length album, “Faciem Diaboli”. While working on this first opus with a fully artistic approach, END OF MANKIND is looking for a label willing to spread its misanthropic message and give full support to crush the divine tyranny. On Faciem Diaboli, END OF MANKIND addresses the topic of women recluses. During the Middle-Ages, the women recluses’ phenomenon was widespread. They were present in every major city. Exiled at the city gates, these spiritual “sentinels” most often came from the common people. They were afflicted with a disease or a loss, but they also needed to atone for mortal sins sometimes. In other words, these women had nothing to lose. Their only salvation was to sacrifice their own life, an ultimate vow of humility and piety. Will their martyrdom be sanctified? "Récluseries" were small lodges located near the entrance of large villages or cities, outside the city walls, often installed on bridges. Those who were locked up in these premises could only leave them as corpses. Women recluses were supposed to be in communion with God in order to drive away all evils from the city (wars, famine, epidemics). In those times, it was a way to reassure inhabitants thanks to this supernatural protection. Women recluses were confined in a damp and tight masonry, very often overwhelmed by cold, and they could not move around. They only received the food other people were willing to offer them and could only talk with those who accepted to speak with them. Very often, they could not face such living conditions for a long period of time. The aspiration to sacrifice and the usefulness of suffering in order to obtain heavenly rewards helped “récluseries” to arise in those times. The band has already started producing this first album. The drum takes are over and have been recorded by Andrew Guillotin at the Hybreed Studio (Merrimack, Arkhon Infaustus, Temple of Baal…). The next steps will be achieved at the Studio HEMLIG under the direction of Etienne Sarthou (Aqme, Deliverance, Freitot…). The mastering will be done in Sweden by Magnus Lindberg (Cult Of Luna, Tribulation…).