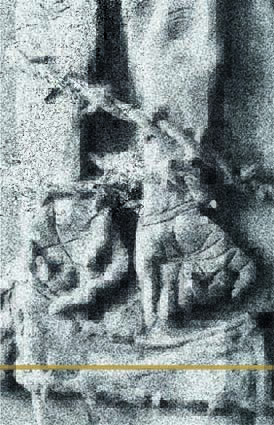 Music is an obscure and ambiguous discipline, whom forms reflect in full light the mysteries of the soul. As most of the art forms, it deals with the paradox of the materialization of thoughts, feelings and beliefs. It reveals what is hidden, dives deep in the depths of mind, and bring back its ghosts to the surface for everyone to see.

And this is what Mhönos’ music is: a slow drowning, an immersion, a quest and a profession of faith. It seeks and evokes ghosts of times forgotten, horrors of a religious nature and the subsequent human fears and beliefs. A droning litany of pain from souls fallen from grace. Choirs, strings and percussions used to evoke a tenebrous mysticism and summon an impure state of trance amongst the believers.

This French congregation saw the light in 2009 and quickly created its own cult. Limited releases and stunning live performances (that should NOT be mistaken with regular “concerts”) gathered an audience of curious fanatics, and made Mhönos a spearhead of everything disturbing, audacious and true in the fields of black arts.

After having released their first effort, “Miserere Nostri” (on tape in 2014 and CD in 2016), then "Humiliati" (on tape in 2015) Zanjeer Zani is proud to release "LXXXVII" on tape format.

4 years after the release of their critically acclaimed album "Humiliati", MHÖNOS emerge once more from their crypt to unveil their newest monumental work of doom entitled "LXXXVII".

Dirgey, pounding, cryptic and sometimes flirting with industrial atmospheres, this latest offering shows a more mature side of MHÖNOS and confirms once more their position as a pillaring force in the french doom metal scene.