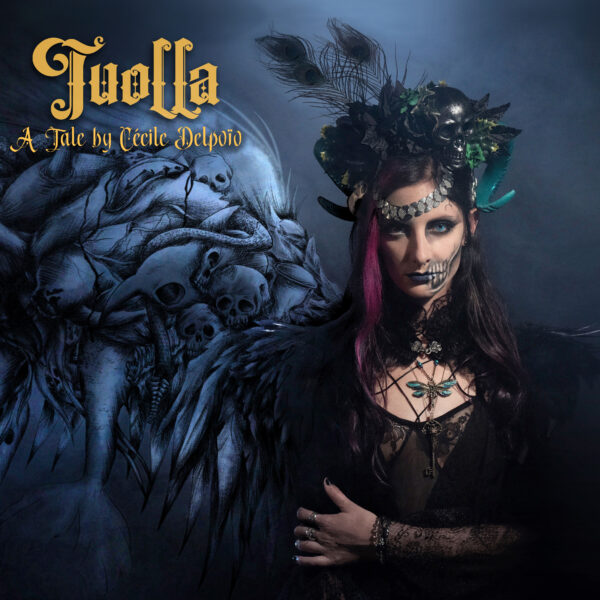 Once upon a time, in a world called Tuolla, there lived a young woman, her name was Aodrëna. She never knew anything else than these lands floating in the sky, peaceful places, nothing less, than pure beauty wherever you lay your eyes. But Aodrëna wasn’t happy, she believed grass can be greener elsewhere… One day she would leave her world and go in search of happiness.

Discover this imaginary world where onirism and its bright colors rub shoulders with disillusions and darkness through a cinematographic and orchestral Dark Fantasy album, sung in Tuollian, the language from the young Aodrëna’s country. Inspired by bands and artists as Narsilion, Ordo Funebris, Hans Zimmer or Dead Can Dance, Cécile Delpoïo, who composes, sings and plays piano and guitare, transcribes into her music these stories coming from remote worlds. At the orchestrations, we find Olivier Reucher with whom she already collaborates and performs in the symphonic metal band Remember the Light.

Coupled with these 11 music tracks, the short story written by Cécile Delpoïo in a more universal language this time, "Tuolla", tells a story about a quest, about always wanting more, about self-destruction, about disenchantments…

Cécile Delpoïo is an artist with several hats who wanted to follow through each aspect of her musical project: videoclip producer in life, she confers to these the same importance as for the music itself and so she produced three ambitious videoclips. The first video clip that will be released, "Stars", had a shooting that extended during a year and a half to collect many pictures from every season and every side of France. Into her videoclips, she takes again the themes she approaches in her short story and offers a new vision as manifold parallel worlds.

Also an illustrator, Cécile did the artwork and the various illustrations that turn into pictures the story told in "Tuolla", a musical but also literary and visual album.